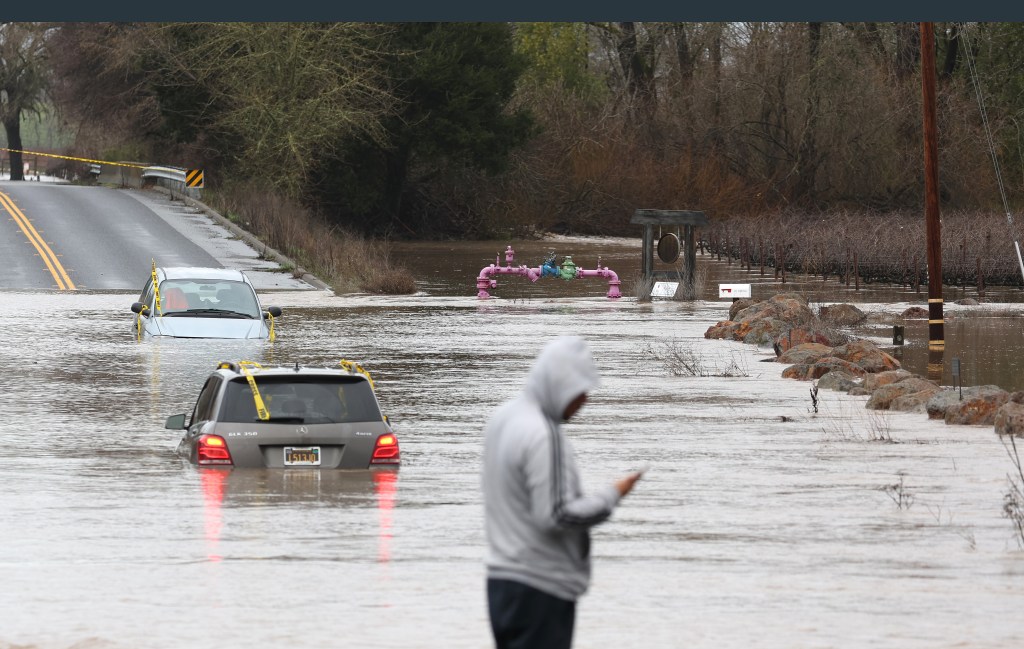 UPDATED with latest: The flash flood warnings announced earlier for Northwestern Los Angeles Country and Ventura County have been extended to all of L.A. County, per the National Weather Service just before 7 p.m.

Some flash flooding already has been reported, the NES said, in areas of Fillmore, Ojai and Santa Paula, especially the burn scar areas from recent-ish fires like the Thomas Fire.

PREVIOUSLY at 4:15 PM: Santa Barbara emergency response officials updated the situation in the region north of Los Angeles this afternoon and it is not good. Among the issues — beyond heavy rain and flooding — is that the 101 is now closed at multiple points, effectively cutting off traffic going northbound into Santa Barbara and also traffic going Northbound out of the county.

“The CHP is in the process of closing 101 at state route 33 in Ventura in order to stop traffic from coming into the county,” said Sheriff Bill Brown. “Several lanes that have been closed in Carpenteria [south of Santa Barbara]. The highway has also been closed at Cabrillo, according to the sheriff.

North of the seaside city, the 101 is closed at Mariposa because “significant rockfall at Gaviota,” said the sheriff, who also indicated that it will remain closed “until some time tomorrow.

“There are big boulders blocking that,” he added.

In L.A., the NWS also updated its flash-flood watches to warnings for Northwestern Los Angeles Country and Ventura County.

The potentially-affected areas include Fillmore, Ojai, Santa Clarita, Santa Paula, Lockwood Valley, Lake Hughes and Elizabeth Lake, especially the burn scar areas from recent-ish fires like the Thomas Fire. Some flash flooding already has been reported, the NES said. The warning will remain in effect until 9 p.m.

PREVIOUSLY, 1:44 PM: The latest in a series of storm systems hit Southern California this morning prompting high winds, flood watches and evacuation orders for some residents.

Santa Barbara issued an evacuation order for all of Montecito, a leafy locale popular with showbiz types that was hit hard five years ago as debris flows inundated houses, overwashed the 101 Freeway and took 23 lives. Creeks there were already swollen by midday Monday.

The evcuation order “includes all 15 zones of the Montecito Community, all Toro Canyon & Padaro Lane residents in the Carpinteria-Summerland Fire Protection District & all residents of Sycamore Canyon in the City of SB and Montecito,” according to SB County.

Flash flood warnings were in effect for inland Santa Barbara and Ojai through 4:45 this afternoon, reported KTLA5. The outlet also indicated “significant rainfall” is expected in Los Angeles after 8 p.m. as the brunt of the storm system is expected to arrive. There is another band moving in Tuesday morning. As that weather moves out, high winds are expected.

Rainfall amounts were on track for 2-4 inches for the coast and valleys, and up to 4-8 inches in the mountains, forecasters said.

“Biggest concern continues to be near the recent burn scars, though all areas will be susceptible to at least minor flooding issues through early Tuesday,” according to the NWS.

Due to the threat of flooding and debris flows in recent burn areas, Los Angeles County officials issued an evacuation warning for residents in the Lake Hughes and Kings Canyon area that will be in effect through Tuesday. Residents were warned to prepare to evacuate by gathering important materials and being ready to leave quickly.

The National Weather Service also warned of gales and high surf through Tuesday.

President Joe Biden approved an emergency declaration for the entire state of California on Sunday and authorized the Federal Emergency Management Agency to coordinate disaster relief efforts and provide emergency resources, the White House said in a statement.

In a move likely to snarl traffic between Beverly Hills-West Hollywood and the Valley, the Los Angeles Department of Transportation implemented a road closure of Mulholland Drive between Laurel Canyon Boulevard and Coldwater Canyon Drive in anticipation of the storm activity.

Partly sunny skies will return Wednesday and Thursday, but more rain is possible next weekend, possibly as early as Friday night, according to the NWS.