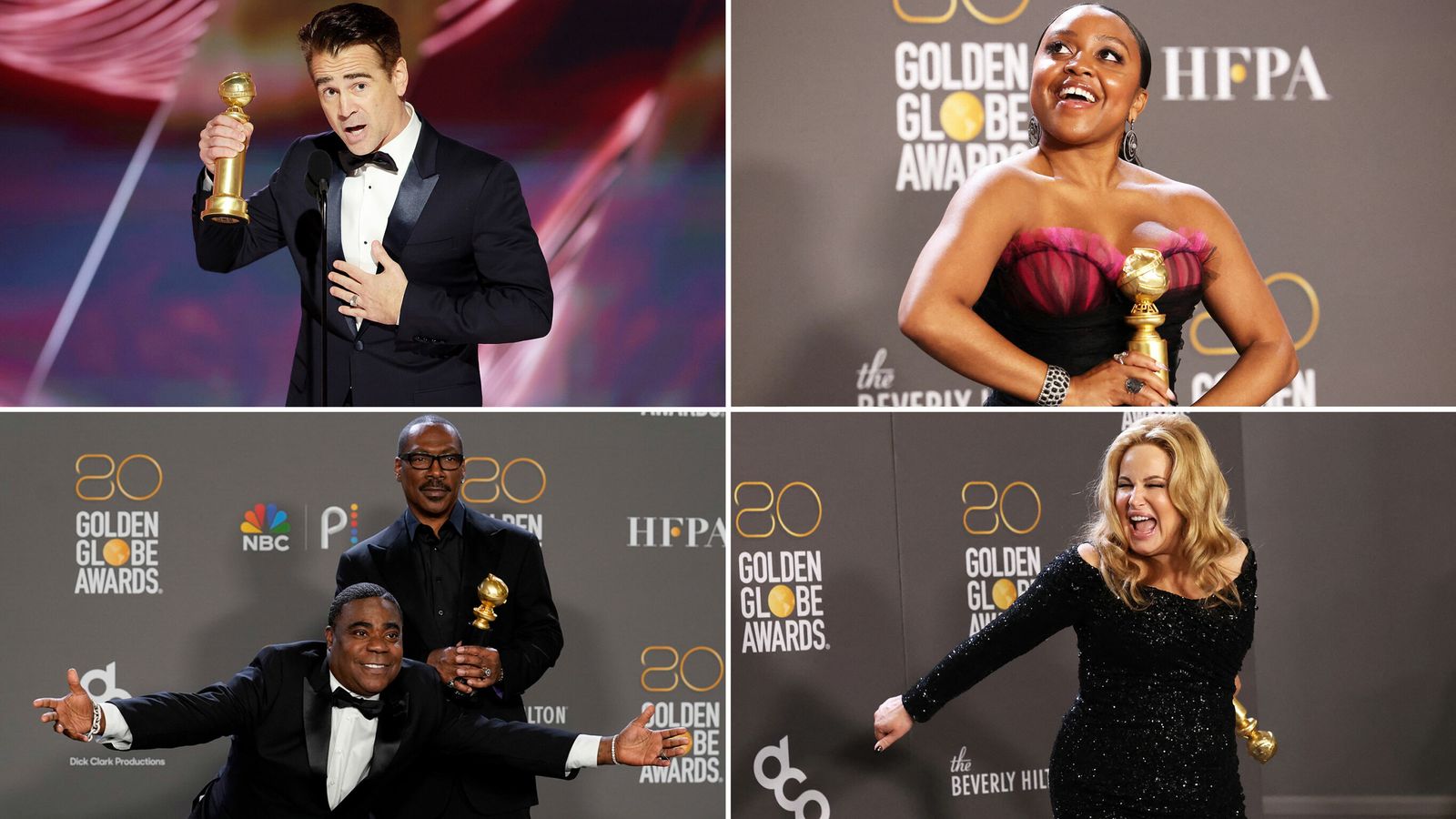 Hollywood stars have returned to the Golden Globes in force – but host Jerrod Carmichael wasted no time addressing the diversity controversy that has overshadowed the awards.

On a night that saw big wins for TV shows The White Lotus, Abbott Elementary and House Of The Dragon – with The Banshees of Inisherin and Steven Spielberg’s The Fabelmans taking home the top film prizes – one of the main talking points ahead of the ceremony had been the question of who would turn up.

Last year’s Golden Globes event was held in private, with no TV broadcast and winners announced on social media – and many stars chose not to acknowledge their successes.

It followed a Los Angeles Times expose in 2021 which found that organisers the Hollywood Foreign Press Association (HFPA) had no black members voting for the awards. The investigation also included allegations of inappropriate “freebies” influencing votes.

“I’ll tell you why I’m here – I’m here because I’m black,” said US comedian Carmichael as he opened the event in Los Angeles last night.

“This show, the Golden Globe Awards did not air last year, because the Hollywood Foreign Press Association, which I won’t say they were a racist organisation, but they didn’t have a single black member until George Floyd died – do with that information what you will.

“One minute I’m making mint tea at home, the next you’re invited to be the black face of an embattled white organisation. Life really comes at you fast.”

He added: “I took this job assuming they hadn’t changed at all. Regardless of whatever the Hollywood Foreign Press Association’s past may be, this is an evening where we get to celebrate. And I think this industry deserves evenings like these. And I’m happy to be here.”

Who was there – and who won what?

The Banshees Of Inisherin won the gong for best film (comedy or musical) – with Colin Farrell named best actor in the same category.

In the drama category, The Fabelmans was crowned the winner – and Spielberg also picked up the award for best director for the film, which is loosely based on his childhood growing up in Arizona after the Second World War.

For TV, The White Lotus triumphed in the category for best limited series, anthology series or motion picture made for television, while star Jennifer Coolidge took home the award for best supporting actress.

Cate Blanchett, Kevin Costner and Zendaya were also among the winners in the acting categories, but did not attend the ceremony.

He led a standing ovation for Michaela Jae Rodriguez, who last year made history as the first transgender actress to win an award – best actress in a TV drama for her portrayal of “house mother” Blanca Rodriguez in his show Pose – as she never got her moment in 2022.

The Globes also honoured Eddie Murphy with a special gong, presenting the star with the Cecil B DeMille career achievement award.

Murphy, known for films including Trading Places, Beverly Hills Cop, Coming To America, The Nutty Professor and the Shrek franchise, used his acceptance speech to make reference to Will Smith’s infamous slap at the 2022 Oscars.

“I want to let you know that there is a definitive blueprint that you can follow to achieve success, prosperity, longevity, and peace of mind,” he told the audience. “There’s a blueprint and I followed it my whole career, it’s very simple…

“Just do these three things: Pay your taxes. Mind your business, and keep Will Smith’s wife’s name out of your f****** mouth!”

The awards took a more serious tone with an appearance from Ukrainian President Volodymyr Zelenskyy, introduced on screen by actor and activist Sean Penn – who has visited Ukraine several times since Russia’s invasion almost a year ago.

Mr Zelenskyy told the audience that it was “clear” the “tide was turning” in the ongoing war in his country, and that Ukraine would be triumphant.

Analysis: The Globes seemingly pulled off the impossible

For all intents and purposes, in terms of A-list names, this year’s Golden Globes felt just like the good old days. Few had confirmed their attendance beforehand, but their presence was evidence, perhaps, of Hollywood’s selective amnesia at a time of box office blues.

The Globes seemingly pulled off the impossible – accepted back after being “cancelled”. Two years on from the HFPA being exposed for its embarrassing lack of diversity and alleged “ethical lapses”, its problematic past practices seem unofficially parked. Laughs even came at one point during the show at the expense of Tom Cruise’s decision to hand back his old awards.

The Globes’ voting body accepted it had to be seen to take a few hits – roasted from the get-go by this year’s host Jerrod Carmichael – but rather than focus on their failings off screen the great strides made in terms of representation on screen were rightfully rewarded.
On stage, we saw Michelle Yeoh referencing her “incredible fight” for recognition, and Ryan Murphy’s impassioned explanation of his mission “to take the invisible and make them the heroes”.

While it was hardly the wild party of previous days, thankfully it still had humour – courtesy of a Colin Farrell joke about cereal and Eddie Murphy’s “definitive blueprint” for success.
It is, of course, in the interest of the Hollywood ecosystem to have this showcase of cinema back – but it could be the ratings that ultimately decide whether all is forgiven for the Globes going forward.

Last year’s event was turned into a “private event” at the last minute by the HFPA after it faced heavy criticism over its lack of black members.

Since the fallout, the organisation has been attempting to rebuild the awards’ reputation from the top down, adding more than 100 new voters to its voting body, which it says “is now 52% female, 51.5% racially and ethnically diverse”. For the first time, journalists from other countries can also be part of the mix.

Twenty-one new members joined the HFPA last year, six of whom are black, and membership eligibility was expanded from Los Angeles to anywhere in the United States.

Tom Cruise, whose film Top Gun: Maverick was nominated for best drama, and Brendan Fraser, who was nominated for a best actor award for his performance in The Whale, were notable absences at this year’s event following the controversy.

Cruise famously returned his three Golden Globe awards after the HFPA revelations. Fraser had said he would not attend following an alleged incident at the Globes ceremony in 2003.