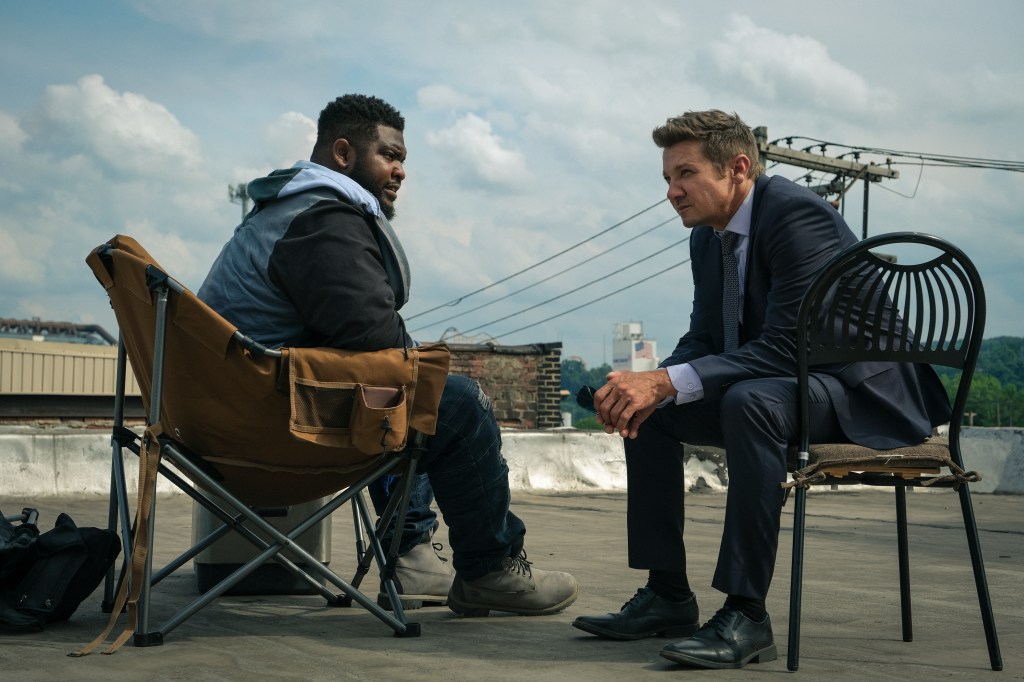 SPOILER ALERT! This story contains plot points from the season 2 premiere of Mayor of Kingstown.

The Jeremy Renner starrer returned to Paramount+ today to address the fallout from last season’s prison riot and the escape of big bad Milo Sutter (Aiden Gillen). Here, Hugh Dillon — who created the drama with Taylor Sheridan and stars as Det. Ian Ferguson — talks about where the new season is going and how Renner’s injuries will impact when — or if — production resumes on a third season. (The show has not received a third season pickup yet).

DEADLINE: First things first: Did your character really have to shoot that pitbull 12 times?

HUGH DILLON Well, yeah! What I love was how that’s a real story. It came from Taylor. It happened in L.A. I love dropping real life into the show. The guy we use as a creative consultant just sent me a thing about a prison that caught a guy trying to bring crystal meth into the prison on a backpack he put on a pigeon. Everything I see now is put through the lens of, would that happen on Mayor of Kingstown?

DEADLINE Is there a theme to this season?

DILLON If anything, everyone is hyper vigilant. It’s more intimate. We’re looking at why these characters do what they do. We’re really steering into what’s triggering these people who are predisposed to their most darkest impulses.

DEADLINE Why is Mike (Renner) so concerned about Milo escaping? Is it all about Iris’ safety?

DILLON It’s all of it. Milo is the head of the snake, a poisonous snake. He’s escaped into the city and there’s money attached to that. There’s history, there’s the girl there.

DEADLINE Why do gangsters like Bunny (Tobi Bamtefa) continue to tolerate Mike?

DILLON It goes back to decades of knowing each other. Mike was in jail and it’s just the city at some point, you know? These are alliances that people make. Everything kind of got to this stage. Mike is based on a dude who I really knew in Kingstown when I first brought it to Taylor. When I grew up, I was playing hockey with guys whose parents were cops. My coach would have a gun holster on his ankle and leave it on the bench. There were other kids whose parents were in jail. I grew up with a guy who I modeled Mike after. He just knew everybody.

DEADLINE Is that guy still in Kingstown?

DILLON He passed away a couple of years ago of throat cancer.

DEADLINE Why were the stormtroopers in Miriam’s (Dianne Wiest) class? Was it a result of the riot?

DILLON Yeah. it is us against them at that point. They are in lockdown. That’s why I love the show and some of these scenes with Dianne, who is adamant about some of this stuff because she’s a person who has gone out and protested at Riker’s Island. She’s got very precise thoughts on how this works. Her reality bled into the show pretty well.

There’s no way Captain Moore (Michael Beach) is ready to go back to work, right?

DILLON No. There’s another actor who is just incredible. His performance this whole season is spectacular.

DEADLINE Who’s to really blame for the riot? Is it time to get new gang leaders?

DILLON I don’t want to go into too much depth about that. But you can land wherever you like on that. That’ll resolve itself.

DEADLINE Where did you shoot the prison tent city?

DILLON A place called Carrie Furnace, just outside of Pittsburgh. It was a big steel manufacturing plant. That’s part of the joy of making these shows, scouting and seeing the places that we can use. Pittsburgh is such a big character.

DEADLINE How are you able to balance your full-time role as Ian and serving as the showrunner?

DILLON Taylor was my acting coach years ago, and I learned from him every single thing. He coached me on a show called Flashpoint. He is driven. He’s a master. If you’re passionate about it, which I am, it’s effortless in a sense. It’s this show I dreamed of making.

DEADLINE I know you’re still waiting to learn if there will be a season 3. If you’re following a sort of normal schedule, when would you fire up production?

DILLON Taylor and I have multiple ideas for multiple seasons. If everything went according to plan with Paramount+ and the rest of it, I would think that we’d start in August, September, maybe pre-production in the summer.

DEADLINE How did you hear about Jeremy’s injury?

DILLON I heard about it from one of the other producers. I saw it on the news and then he sent me a video. He’s very funny. I just think the world of that guy and I’m happy he’s surrounded by his family. Anything we can do to help, we will. That’s the biggest thing. He’s like family.

Showtime to combine with Paramount+, rebrand with new name
‘He wants world dominance’: Pompeo reveals who he thinks is more dangerous than Putin
Your Sleep Window Will Help You Get The Best Night’s Rest
Ford and General Motors enter a new phase of uncertainty on prices and demand
Cheryl on her West End debut: ‘Disasters are part of the experience’